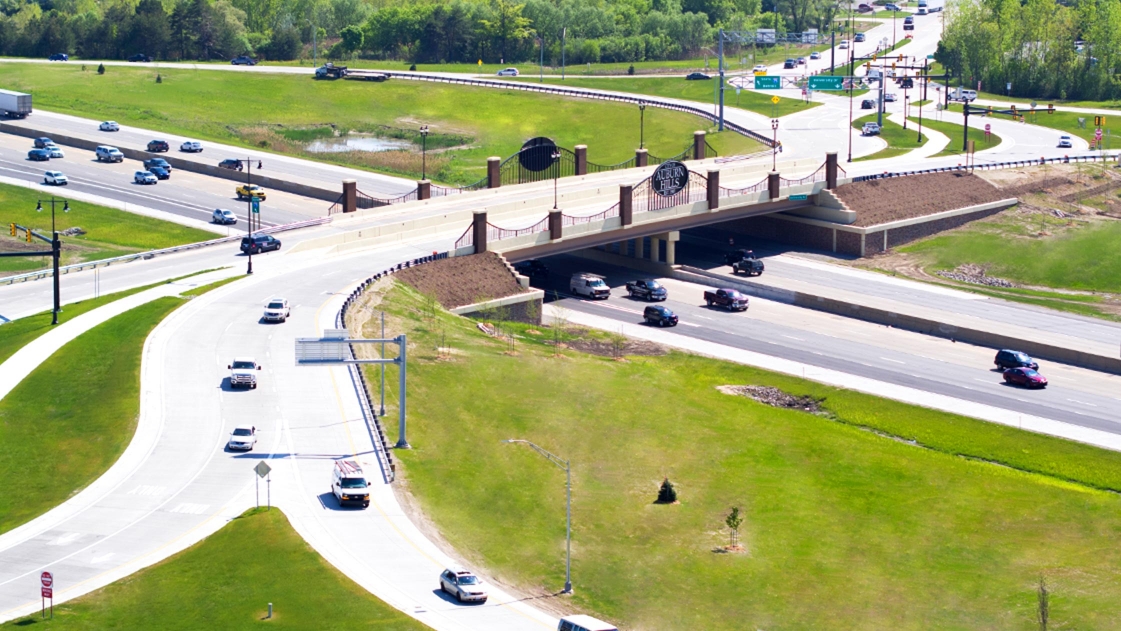 In 2015, the City of Auburn Hills is home to the state’s first diverging diamond interchange (DDI), at I-75 and University Drive. Part of a $25 million improvement, the project included removing a partial cloverleaf interchange, revamping a failing bridge that warranted replacement, and adding non-motorized crossings.

The interchange is the main entry to the City of Auburn Hills, home to several universities and a high-tech automotive corridor. More than 22,000 vehicles per day travel over the bridge, connecting corporations, universities, and hospitals.

The diverging diamond is a French import to the United States, first used in the city of Versailles, just outside Paris, in the 1970s. The first DDI in the U.S. made its debut in 2009 in Springfield, Missouri. Since then, about 90 DDIs have been built.

Drivers on the left

The diverging diamond interchange might appear complex on paper, but the function is surprisingly simple. The design elements—ramps, traffic lights, medians—are basics found in any highway interchange.

The difference lies in the way that drivers navigate a DDI. The diverging diamond concept requires drivers to briefly cross to the left—or opposite—side of the road at carefully designed crossover sections. Drivers travel for a limited distance, then cross back to the traditional side of the road.

This unconventional aspect facilitates easier left turn movements and allows traffic to move from the freeway ramp to the intersecting roadway without ever turning across the path of opposing traffic. Traffic signals are installed at the crossovers.

Cutting crashes in half

One of the most compelling benefits of the DDI design is that it increases safety. It does so by reducing the number of potential conflict points through the elimination of left turns crossing opposing traffic. This can equate to as much as a 50% reduction in crashes.

Stats show that one year after the first DDI in the U.S. opened in Springfield, crashes were reduced by 46%. Left-turn crashes were down 72%, due to fewer conflict points.

A diverging diamond interchange is so effective that Popular Science magazine named it one of the best innovations of 2009.

A diverging diamond interchange brings operational and cost benefits, too:

A DDI typically costs less than a conventional interchange because it requires fewer lanes to provide the same capacity. One of the biggest costs in roadway construction is land. The smaller the roadway or interchange’s footprint, the less expensive it is to build.

The engineering team here at OHM Advisors initially proposed a diverging diamond interchange as the solution to Auburn Hills’ traffic woes in 2009, before the first DDI opened in the United States. We looked at different options, including a five-lane partial cloverleaf, single point urban interchange and roundabouts at the ramp termini. The DDI had the lowest cost and the best performance for the public.

An application for transportation grant funds analyzed the cost to benefit ratio of different traffic configurations at the interchange. Analysis showed an 8:1 cost benefit ratio, based on reductions in travel time, fuel consumption, greenhouse gas production, and crash occurrences.

Visual cues lead to intuitive use

For some people, aerial views and drawings make diverging diamond interchanges look confusing to navigate. However, the key elements of the interchange are designed to induce motorists to continue on their current path. These elements help reduce or eliminate driver error.

The two lanes of one-way traffic where vehicles drive on the opposite side of the road are typically separated by a raised median, which discourages drivers from going in the wrong direction. Other features include wayfinding arrows on the pavement, green arrows at the signal heads and a glare screen to obscure headlights of opposing traffic while traveling left of center.

The greatest concern regarding the use of diverging diamonds centers on the human factor. Objectors contend that drivers will be confused at the crossovers and may drive into oncoming traffic.

The 90 or so DDIs built in the U.S. in the last decade prove those fears unfounded. When the Missouri Department of Transportation considered building the nation’s first DDI, MoDOT teamed with the Federal Highway Association to test drivers’ abilities to navigate the new interchange design.

In a 2014 study of several DDIs in operation nationwide, the FHWA confirmed that wrong-way maneuvers have been rare.

Michigan’s lagging economy put DDI discussions on hold for years until early 2014, when a failing University Drive bridge brought City leaders, Michigan Department of Transportation, and community partners together to fund the project.

In the interim years between first proposing the DDI and project approval, our transportation engineers tracked new DDIs opening across the U.S., talking with other engineers and taking note of design refinements.

In 2014, the team at OHM Advisors performed a preliminary engineering study with current traffic volumes and utilized previously vetted DDI design principles to confirm their previous analysis. They found that the diverging diamond interchange option still offered the best performance, at the lowest cost.

Auburn Hills Mayor Kevin McDaniel told MLive.com that he was excited for his city to be home to the state’s first DDI.

“This innovative interchange will benefit our residents and be enormously advantageous to our thriving business community comprised of world-class companies,” said McDaniel. “The lasting benefits of the DDI will far outweigh the short term inconvenience during construction.”